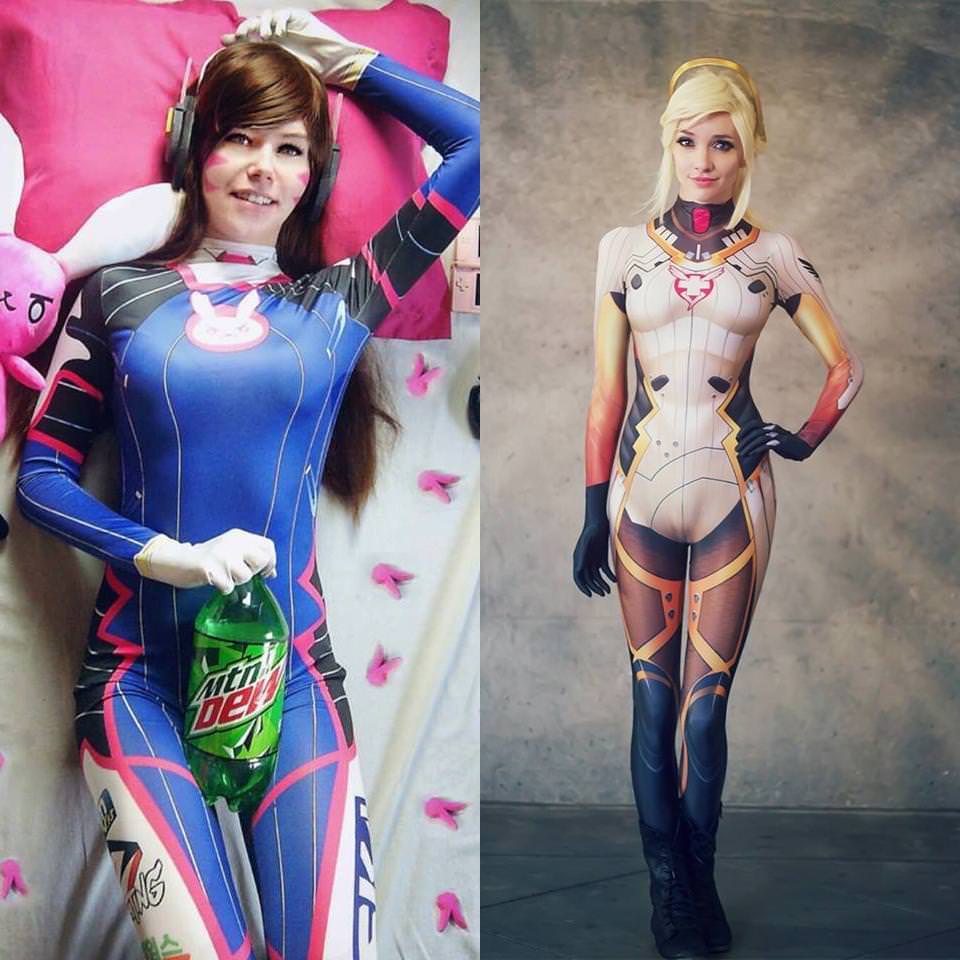 Nick was a pretty typical boy. He loved video games and his favorite game was Overwatch. He had played this game for many hundred hours. His girlfriend Katy loved to play it too. His most favorite Hero was D.Va and she mostly played Mercy. They were really good together and always had a lot of fun. One day, Katy suggested, "Hey, what do you think if when we order a cosplay of our favorite characters!" "I do not know..." Nick answered, "Me and a D.Va cosplay? I mean, you're a woman, a mercy cosplay would look good on you, but D.Va  on me... " " Come on! It'll be fun, " she said, smiling and encouraging "I bet we will be the best D.Va and Mercy couple out there!" She smiled "Hmm. All right, "Nick agreed. Katy grinned, hugged Nick and gave him a kiss.

A few days later, Katy came by again. "Hey, Nick. The costumes have arrived! "Cool, show me! "Katy puts the box on Nick's desk, takes out a folded fabric and hands it to Nick. Nick unfolded the stack and held a D.Va skinsuit in front of him. "And you mean, that will look good on me? After all, I have dont have a body like D.Va. Such a skin-tight fabric surely..." " That's no problem at all. It will look great. Trust me!" She winked at me. "Try it on!" "Right now?" "Yeah, you idiot", she said with a smile. Nick sighed and pulled himself out to his underpants. Then he opened the zipper on the back of the suit, put his legs in it and then the arms through the sleeves. "Wait, I'll help you!" Katy said, walking behind him and pulling up the zipper. Then she reached into the box, took out two white gloves and gave them to Nick, who put them on immediately. He looked at himself in the mirror. "Well, I'm not looking that great." "You have to be patient," Katy chuckled. "But I have to say the skinsuit fits surprisingly well. Where did you find such a size for a boy like me... hhh... " Nick gasped " What's that? The suit got tighter every second! This is too tight, what happened here? "Do not worry, sweetie, that'll be over soon! Nick looked at his friend in disbelief. How can she stay so calm while he bearly got enough air?

Then he saw himself behind her in the mirror. The suit did not just tighten, it deformed Nick's body! He watched in the mirror while his shoulders narrowed, his waist got slimmer, his hips wider, his ass bigger and his whole figure became more feminine. Then his chest rose, as two breasts started to grow. "K .. Katy", he asked, but he was interrupted as the suit tightened in his crotch. He expected pain, but it did not hurt at all. It was actually a very pleasant feeling. Then it was gone. In the mirror, Nick only saw that the bulge that had been very visible in the skin-thight suit was now completely gone. He guessed already what happened and he slowly touched his crotch. His guess got confirmed. He felt neither his penis nor his testicles. Instead, he felt a slid through the suit. Nick was shocked. Wat had happened. Did he dream? It was not possible for him to turn into a girl. He wanted to turn to Katy, but then he felt something on his shoulders. He looked back in the mirror and saw his hair was growing out until it got to his waist. When he looked up again, he was shocked. While he watched his hair growing, his face had completely changed. In the mirror, he saw a perfect copy of D.Va. Four pink spikes appeared on his cheeks and a headset appeared on his head. With that, the transformation seemed complete. 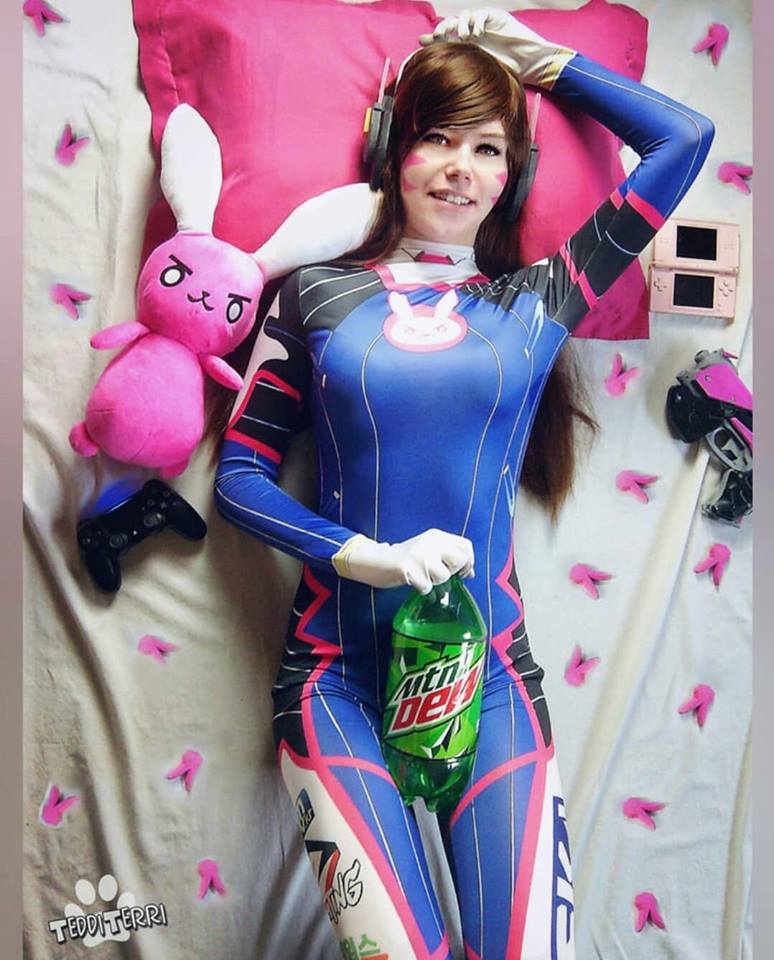 Nick was baffled. He turned to Katy, who smiled expectantly at him. "How do you like it?" "Like it... What happened here Katy?" Nick startled as his voice suddenly sounded like D.Va's "Chill", she tried to placate him. "I have found these skinsuits on the internet that turn one into their respective characters. I thought that was really exciting and wanted to see if that really worked. And it does." Katy smiles "And that's why you turned me into a girl?" "Do not worry, if you do not wear the suit in exactly 24 hours, you'll turn back to normal." "B... But why?" Nick asked. "Why not?" Katy asked, smiling, "Its really cool! And you can not tell me you did not want to know what it's like to be a girl, right?" Katy winked at him. Yes, which boy did not wonder what that was like. From this point of view, this was a unique opportunity. "Besides ..." Katy hem and hawed "I've recently found out that I'm bisexual. And so... When I saw these skinsuits, I realized that I could discover this side of myself without... Well..." Katy looked down on the floor. Nick took a step toward her and hugged her. "I love you", Nick said, "That's why I'll do anything for you." He released the embrace but did not release her. "And if you want me to be D.Va for a day, then I'll do it." Katy started smiling again. A tear rolled down her cheek. She gave her friend a short hug and then turned back to the box.

"I still have a surprise for you. Turn around please." Nick turned around. "Don't cheat!" Katy chuckled. Nick heard her take off her clothes and put on some clothes. Shortly after that, he heard her groan. He wanted to turn around and see what was going on with her, but Katy said quickly "Do not turn around! I say when you can!". A few more seconds passed and then Katy said: "Okay, you can now turn around!" Nick was confused. The voice did not sound like Katy's, and where did she suddenly get that Swiss accent ... Nick put his hand over his mouth when he saw Katy. Or rather Mercy. Katy had a Mercy Skinsuit on and was not to be distinguished from the appearance of the "real" Mercy from the game. Katy had never had a bad physique, but the suit had a go on it. Her curves were perfect. Her breasts and ass had also grown a bit bigger and had perfect shapes. "And what do I look like?" Katy asked in the voice of Mercy and her swiss accent. "You, you just look gorgeous Mercy!"

Katy giggled "So you already call me Mercy?". Nick seemed a bit confused, then he answered: "But your name is Mercy, isn't it?" "No," she said, confused. "My name is Mercy!" It took a moment before she realized what she had just said. She put her hands over her mouth. "Oh my god. Could it be that these suits not only change our appearance? " What do you mean?" "Tell me your name!" "Why that? My name is D.Va. To be exact, my real name is Hana Song" Nick also needed a few seconds to realize. "You mean, we also mentally transform into the characters?" Katy nodded scared. Then she suddenly touched her head. "Ahh, what is that?" Nick wanted to hurry to her, but then it overflowed him too. He saw pictures, pictures from the life of Hana Song, her childhood, how she became an e-sport champion under her tag D.Va and how she fought the Omics with her MEKA. Then it was over. Although Hana remembered that she had once been Nick and had only transformed into D.Va with the help of a magical skinsuit, these memories felt very distant. The memories of Hana Song were much stronger. She looked over at Mercy. She seemed to feel similar. Even Katy's memories of Angela "Mercy" Ziegler were much closer than her old life. "Hey Angela," Hana said, "You look really sexy!". Mercy smiled and walked slowly up to D.Va. "You too, Hana," she said and started kissing her. Hana returned the kiss. They collapsed into bed together and started caressing each other's bodies as they kissed. Deep within, both knew they would not take off the suits in 24 hours.  This just felt too way to good! 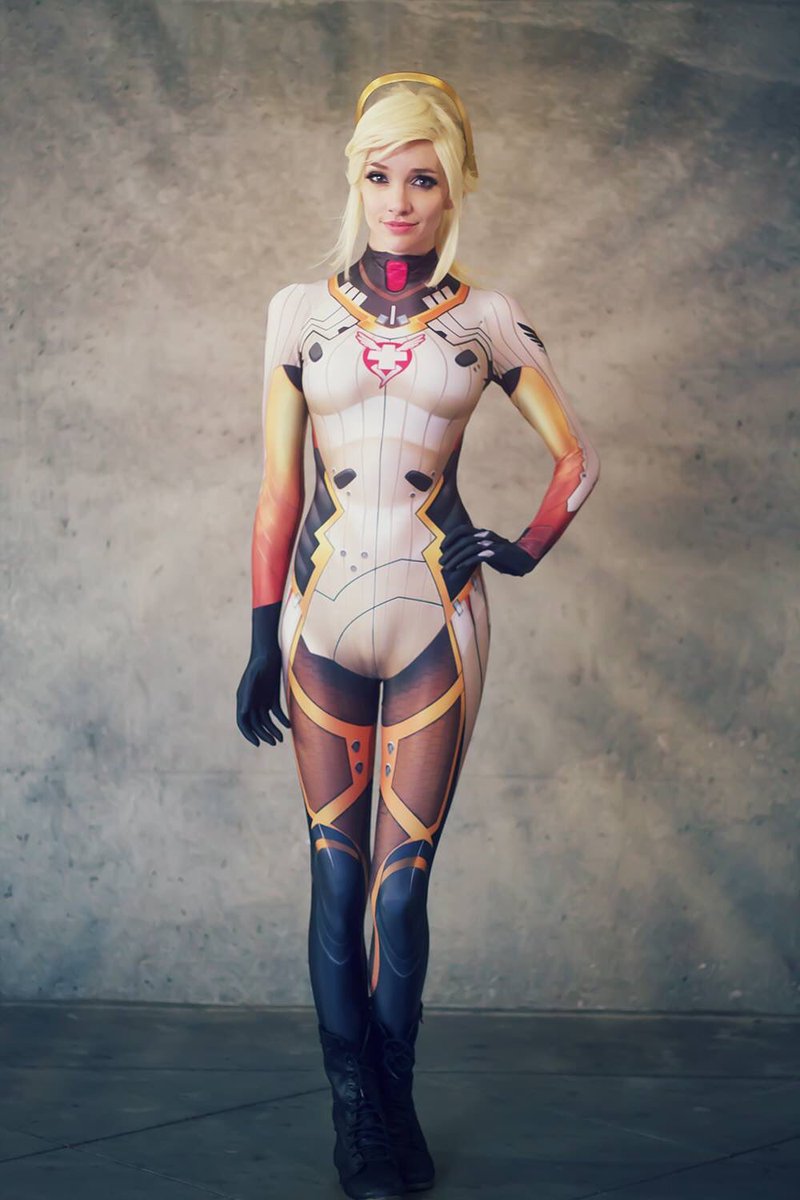